DeWitt Library to Host Exhibit of the Saint John’s Bible 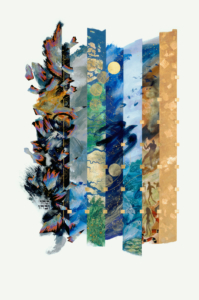 “Creation” is one of the pieces included in the Saint John’s Bible exhibit.

Completed in 2011 after 15 years of work and housed at Saint John’s Abbey and University in Collegeville, Minn., the Bible incorporates many of the characteristics of its medieval predecessors. It was written on vellum using quills, natural handmade inks, hand-ground pigments, and gild such as gold leaf, silver leaf and platinum. Yet it employs the modern New Revised Standard Version as well as contemporary scripts and illuminations.

The Saint John’s Bible is two feet tall and three feet wide and includes more than 1,100 pages organized in seven distinct volumes. The Bible was created by a group of 23 scribes, artists and assistants in a scriptorium in Wales under the artistic direction of Donald Jackson, senior scribe to Queen Elizabeth’s Crown Office at the House of Lords. The team worked in conjunction with a committee of theologians, scholars and artists from Saint John’s Abbey and University.

The prints displayed in this exhibit showcase a small sampling of the approximately 160 illuminations in the completed work. The exhibit includes prints representing creation, Adam and Eve, the Ten Commandments, Ezekiel’s vision of the new temple, the parable of the sower and the seed from Mark 4, the Beatitudes, and more.