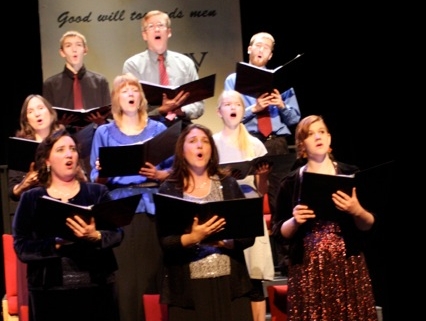 ORANGE CITY – It’s both serious and touching … and wildly hilarious. That’s the show, A Christmas Pudding.

The SchoolHouse Company, in conjunction with the Orange City Arts Council, is proud to present their 2013 Christmas production, A Christmas Pudding. Performances will be held Dec 13 and14 at 7:30 p.m. in the Allen Theatre at Northwestern College’s Dewitt Theatre Arts Center.

A Christmas Pudding is a delightful collection of Christmas poems, short stories and carols – including selections from “The Gift of the Magi,” A Christmas Carol and the Bible. Other selections include stories from Mark Twain, Emily Dickinson, Henry Wadsworth Longfellow and Charles Dickens.

“The most compelling part of the show is its variety of material,” said April Hubbard, director of A Christmas Pudding. “Some of the selections are quiet and solemn and others wildly hilarious. All illuminate some truth about the Christmas holiday, from insanely complex Christmas recipes to memories of a simpler and poignant Christmas past.”

All cast and crew members are residents of Orange City with the exception of Dykstra and Aardsma, from Maurice, and Haldeman, from Council Bluffs.

Tickets are $7 for adults and $5 for seniors and students, and children ages five and under are free. The box office opened Dec. 2, with reserved seating available. Email boxoffice@nwciowa.edu to reserve your tickets.

An Evening of Dance
Scroll to top