Get those bodies pumped and those jazz fingers ready to delve into storytelling through choreographed movement. Explore the foundation of dance, basic steps, and learn a dance combo that demonstrates the importance of body movement in dramatic form.

This year’s concert will include seven dances in numerous styles, including contemporary ballet, hip-hop, step, musical theatre and tap. Ninety students—both with and without prior dancing experience—are participating in the show. Each dance is choreographed by student leaders. All Northwestern students are able to audition for RUSH, and every student who auditions gets placed in a dance.

Tickets for RUSH are $1, with all proceeds going to next year’s production of the concert. RUSH ticket requests must be made via email at boxoffice@nwciowa.edu. Tickets will go on sale for Northwestern Theatre Patrons on Tuesday, Feb. 12, and for the general public on Wednesday, Feb. 13, at 4 p.m.

The 8th annual gathering of local dancers, Evening of Dance 2019 is sure to bring delight. The tradition allows our students and instructors to showcase their talent, learn from each other, and wow their audiences with new, innovative (and sometimes adorable!) dance and creative movement.

The 7:00 p.m. performance will feature a variety of dance styles under the leadership of dance instructors from 6 local teams, troupes, and studios.

Seating is general, and tickets are required for everyone not dancing in the show. Admission is $5.50 each for children and adults. Tickets are also available at the door.

The dance teams from Northwestern College, MOC-Floyd Valley High and Unity Christian High, and students from Elite Dance & Tumbling, Sheldon Dance Studio and Robin’s School of Dance will present an hour-long show in one of the most popular events of our season!

TWO ON TAP brings audiences back in time to an era when couples like Fred & Ginger and Mickey & Judy filled the silver screen with undeniable chemistry, effortless harmony, and precision tap dancing. Gorgeous vocals, exciting choreography, and unique musical arrangements all take center stage in performances which have entertained tens of thousands worldwide.

Join them as they take us on a song-and-dance tour of American holiday classics—plus catch our local dance troupes as they steal the spotlight with the opening number!

Broadway professionals Melissa Giattino and Ron DeStefano bring variety to the mainstage in a world-class headline act filled with timeless melodies from the Great American Songbook, fantastic vocals, gorgeous costumes, and exciting tap-dancing. Since debuting in February 2010, this one-of-a-kind duo has performed at hundreds of venues worldwide while fulfilling one important mission: to breathe new life into classic song-and-dance with clever arrangements, a meaningful connection to the audience, and signature high-energy routines.

Happy Holidays with Two on Tap!

“The Hispanic population has begun to be an important part of the Orange City community, and it’s important to have shared spaces where we can learn to understand each other and learn about each other’s cultures,” says Olga Alvarado, an Orange City Arts board member of Colombian descent who helped plan the event.

With nearly 10 percent of Sioux County identifying as Hispanic according to the 2013 Census, the event aims to foster deeper cultural understanding while providing top-notch food and quality entertainment.

“Our principal goal is always to have people’s minds opened to the diversity of Latin American cultures through a beautiful, fun medium — music,” Stein said.

Stein and East will host a free, all-ages interactive percussion workshop at 6:15 p.m. before their performance at 7 p.m.

Separate from the larger band, the duo (known as Calle Sur, right) will also provide a free children’s workshop for grades kindergarten through fifth at 1 pm at the Orange City Public Library. The participants will make simple instruments, sing, dance, and act their way through a Brazilian rain forest.

Free transportation from Sioux Center will be available. A bus will leave the Centre Mall parking lot at 6 and 6:30 p.m., with rides returning from Orange City back to Sioux Center at 8:30 and 9 p.m.

Harold Heie, chair of the Festival Latino planning team and chair of CASA (Center for Assistance, Service, and Advocacy), says Festival Latino is a collaborative effort that aims to bring people together.

“Part of it is just getting to know one another,” Heie says. “When you get to know people, things always change.”

Attendees are invited to wear traditional clothing from their country of origin.

Moon Hooch — an energetic trio with genre-bending music — is performing a free show Wed., June 3, at 7 p.m. at Windmill Park in Orange City.

When Orange City Arts members heard locals buzzing about the band’s unique sound — two souped-up saxophones and a drum — they knew they had to see if they’d perform for the Onstage Orange City series.

“I’m not sure what others’ responses are, seeing a wild man blowing the sax with a traffic cone as a mute – but mine was love at first sight,” Mahr said.

His enthusiasm for the “cave music” band spread to Janine Calsbeek, director of Orange City Arts, who reached out to the band’s reps.

To her surprise, Moon Hooch — comprised of saxophonists Mike Wilbur and Wenzl McGowen, and drummer James Muschler — had an open date available on their tour from Ohio to Minnesota, and were interested in making a pit stop in Iowa.

There was just one minor caveat — Orange City Arts had to drum up the funds to keep the show free. Mahr stepped in to help fundraise, and Old Factory Coffee Shop, along with Orange City’s Quatro Composites™, joined as corporate sponsors for the free outdoor event.

The concert is open to all ages, and the original, unexpected tunes are sure to wow the young — and young at heart. But to describe the band’s sound? That’s a tough one. They have an inventive style all their own — something between jazz and dubstep, with a rock-vibe for good measure.

Each band member studied in New York at the New School for Jazz and Contemporary Music. Their stylistic choices — like using modified saxophones to create pulsing beats — creates indescribable music.

The band (which provides soundtracks for famously epic NYC subway dance parties, according to The New Yorker) describes their work “like house music, but more wild, more jagged, more free, more natural to live in.”

Moon Hooch got its start playing on subway platforms, and quickly grew a devoted fanbase that led to a national tour with They Might Be Giants, and multiple gigs on the festival circuit.

“Moon Hooch is amazing! They’re over the top,” Calsbeek said. “Very energetic and crazy. Their music is not for the faint of heart — it’s something different and I think it’ll be appealing to a lot of ages.”

Judging from previous shows, Moon Hooch’s power-packed performance promises to get audience members talking — and maybe even dancing out of their seats. Attendees are invited to bring their own lawn chairs or blankets. Concessions will be available for purchase.

“This is going to be something different,” Calsbeek says. “Orange City Arts has never had anything like Moon Hooch.”

The Orange City Town Hall is the event’s rain location. For changes related to the weather, visit orangecityarts.net or facebook.com/ocArts. 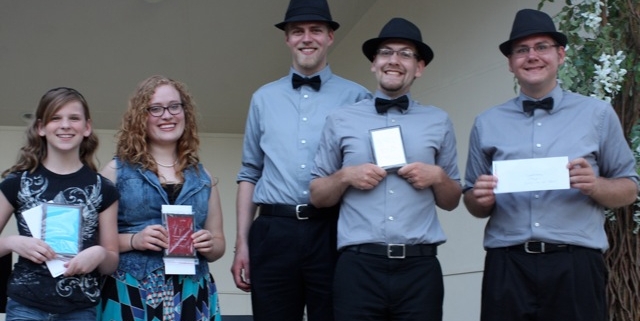 Onstage Orange City begins its sixth season of Wednesday evening shows, and the stage will be popping with entertainment. It’s Orange City’s Got Talent!

Windmill Park is the place, Wednesday, May 27 the day. The show begins at 7:00pm.

This annual show promises a variety of performances from talented locals. And the talent comes both from within Orange City and beyond city limits.

Judges will be Tulip Queen Cara Venema, City Administrator Duane Feekes and Steve Mahr of Old Factory Coffee Shop. Lois Estell and Amanda Haverdink are emcees. The 2014 winner of Orange City’s Got Talent, Sydney Krommendyk, will treat the audience to a song during the judges’ deliberation. (Sydney is pictured above, with other 2014 OC’s Got Talent winners.)

ORANGE CITY –  Sydney Krommendyk, Hannah McGarvey and The TriTones took the prizes in the fifth annual Orange City’s Got Talent!

The area talent show was held Wednesday, May 28, 2014 at Windmill Park in Orange City.

Sydney Krommendyk, (left in photo at top of page) sixth grader from Orange City, took the top prize with her vocal rendition of Titanium.

Hannah McGarvey of Alton (2nd from left in photo at top of page) played a cello piece by Astor Piazzolla,  Libertango, and earned the second place award.  Her accompanist was Lori Vande Brake.

Tri-Tones (right in photo at top of page), an a cappella trio of Ben De Groot and Sam De Groot of Sioux Center, and Joel Pasma of Ripon CA, won third place.

The other seven acts in the talent show were Ensemble Royale, The J’s, Kari Broadway, Julie Junck, Jade De Kock, Miranda and LaRae Bloemendaal, and Christie Conover and Angela Riedeman.

The evening ended with Popular from Wicked, performed by emcees Amanda Haverdink, the 2013 OC’s Got Talent winner, and Lois Estell.

SIGN UP to be part of the 2015 Orange City’s Got Talent! Click here to register. Please sign up for an audition time by May 12. Auditions will be May 19-21.

First, second & third place winners of OC’s Got Talent 2014 are not eligible to be contestants for this year’s event, but may audition again in 2015. 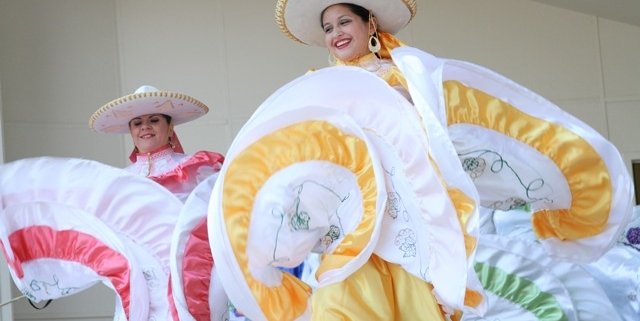 The evening begins at 5:00pm. Experience arts and crafts, mural painting, games, and a “fun zone” for kids between 5:30 and 7:30.  Starting at 5:00 and going until 7:00, authentic Latin cuisine will be available for purchase and enjoyment.  The main event is Mariachi Los Rancheros from Hawarden, playing from 7:00 to 8:00. The evening ends with participation by festival attendees in some high-energy Zumba.

Throughout the event, t-shirts with the festival logo as well as t-shirts from CASA featuring the slogan “Love Our Immigrant Neighbor” will be available for purchase.

For more information and to join the conversation, visit facebook.com/FestivalLatinoOrangeCity.