In November, the Sioux County Historical Society and Dutch Heritage Museum held their last Night at the Museum presentation of the 2018 year. Dr. A.J. Neumann (Doc), a former veterinarian known throughout Northwest Iowa as the “Horse Doc,” presented his extensive Native American collection, which is on display at the museum.

Prior to his presentation, Dr. Neumann was introduced by Renae Vander Schaaf, a published author from Alton, Iowa. A few years ago, Dr. Neumann and Vander Schaaf were strangers. Now they share a special connection―they spent years authoring Dr. Neumann’s memoir together. The book, entitled Get Up, Get Going, won the 2018 Write Place Book Contest earlier this year. 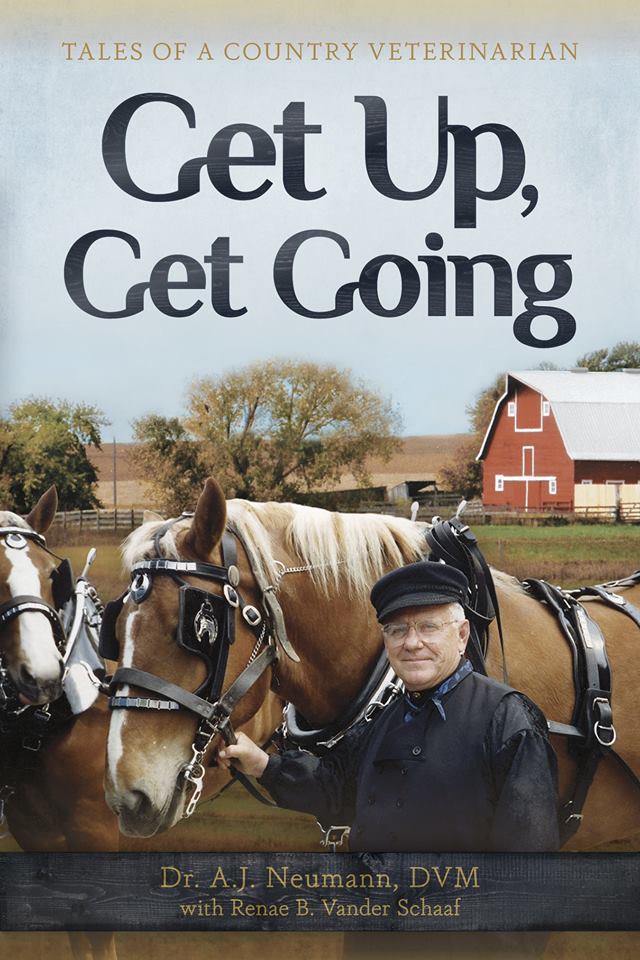 Shown here is the recently released cover of the memoir. Image courtesy of the Write Place.

What follows is Vander Schaaf’s introduction of Dr. Neumann from that evening:

Many of you know AJ Neumann as a former veterinarian for this area. When he retired from his general livestock practice he chose to concentrate on equine and became known as the Horse Doc.

His work took him to many farms and ranches throughout the states and overseas. But no matter where he went he made friends. They soon realized he was a purveyor of history and enthusiastically collected items especially those pertaining to agriculture, the Civil War and Native Americans.

They also aided him in helping him locate items to purchase to build in his collection. As much as possible Doc Neumann sought to learn the story that went with the items. Sometimes directly from the source, other times he researched through reading and listening to others.

This collection is one of a kind with many unique items that help show the Native American culture and provides us with a glimpse into their lives.

Tonight you are in for a real treat as this man has an amazing memory and is an incredible story teller. I should know. For the past three years we have been working together to write down a portion of the life experiences of this 92 year old gentleman.

If it weren’t for a casual coffee gathering, Get Up, Get Going might not have been written. “I knew him by reputation. He was a vet for my husband’s family, but I did not know him personally,” Vander Schaaf said. Neumann and Vander Schaaf met for coffee with mutual friends, and through this meeting, the idea for the book was born.

Dr. Neumann and Vander Schaaf spent three years writing Get Up, Get Going, mostly in Dr. Neumann’s home. “We would just sit by the kitchen table and work. Whatever topic he decided to work on is what we did,” Vander Schaaf explained.

The memoir spans a fulfilling life of over 90 years, from the Depression to decades spent serving Northwest Iowa farm families.

“It really gives a good story of one man’s life that spans 90 years, and it has a little bit of everything. It has history, humor and it covers the serious side,” said Vander Schaaf.

Get Up, Get Going is set to be published in 2019, and the cover of the book was recently released by the Write Place.