Representatives from these community organizations provided the following updates : 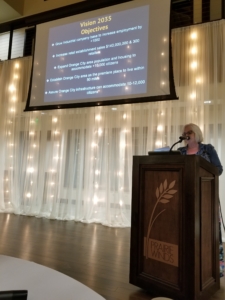 The meeting was recorded in its entirety and is available to view.

In the spring of 2016, a group of community leaders came together to talk about the future of Orange City. The question was asked “What do we want Orange City to look like in 2035?” The group met and determined vision statements for the community to be used as a guide for future planning.

These 2035 vision statements include: